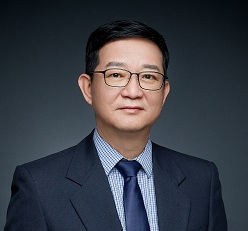 Hsing-Lin Wang earned his B.S. in Chemistry from Chung Hsing University in 1984 and his Ph.D. in Organic Chemistry from the South Florida University in 1992. He worked as a postdoctoral researcher at the University of Pennsylvania with Prof. Alan G. MacDiarmid from 1993 to 1995 followed with another postdoctoral researcher job in Los Alamos National Laboratory between 1995 and 1998. After that he became a scientist in Los Alamos National Laboratory and was promoted to senior scientist in the year of 2008. In 2016, he joined the Department of Material Science and Engineering, Southern University of Science and Technology .

Professor Hsing-lin Wang worked at the University of Pennsylvania with Prof. Alan G. MacDiarmid, Nobel Prize winner in Chemistry. He has studied organic chemistry and polymer chemistry for more than 20 years. He once served as the program host of Los Alamos National Laboratory of the U.S. Department of energy and the team leader of "conductive polymer application and research", now he is a chair professor in the department of materials science and engineering of South University of science and technology, director of the academic committee of Guangdong key solid state battery laboratory and director of Shenzhen material gene large device preparation platform . In 2018, it won the title of national leading talents, 2017, Guangdong Province, and 2016, Shenzhen peacock plan A. Research fields include organic functional materials, organic / inorganic composite materials (solar cells, energy storage and conversion), organic biomaterials (biocompatibility, sensors), and nano composite materials (catalysis, sensors). In recent years, Professor Hsing-lin Wang has focused on the construction of hybrid perovskite solar cells, the synthesis of fullerene derivatives and conjugated polymers and their application in solar energy conversion, the design of nano materials and catalysts for energy storage and converters, the development of surface enhanced Raman spectroscopy based on conjugated polymers, conjugated oligomers and polymerization for light-emitting diodes Synthesis of PPV and CNTs for chemical and biological sensors, design and preparation of high-performance fibers, high-throughput preparation of material genes, etc.

Professor Hsing-lin Wang's work has been published in more than 190 international authoritative academic journals, including Science, Nat. Nanotechnol., Proc. Natl. Acad. Sci., J. Am. Chem. Soc., Chem. Soc. Rev., Adv. Mater., Phy. Rev. Lett, Adv. Func. Mater., Nanoenergy, Chem. Sci., Chem. Mater., etc., with more than 11700 citations and 51 h-index. The article has been selected as the cover by Chem Soc. Rev., Adv. Func. Mater., Chem. Comm., J. Mater. Chem. and other journals for many times. The relevant achievements have been reported and highlighted by the media for many times.

Design of nanomaterials and catalysts in energy storage and conversion devices

Synthesis of Conjugated Oligomers and Polymers for Light Emitting Diodes

Preparation of PPV and carbon nanotubes for chemical and biosensors

The team has been engaged in the synthesis of fullerene derivatives for a long time. The synthesized bi-substituted fullerenes and green fullerenes have excellent electronic properties (J. Org. Chem., 2010, 75, 4574-4583). In addition, progress has been made in the research of honeycomb array for charge transfer generated by hybrid of conjugated polymer and fullerene (Chem. Mater., 2010, 23, 759-761; patent patent us 5981695).

(4) Development of surface enhanced Raman spectroscopy based on conjugated polymer

Based on the chemical reduction and surface chemical properties of conducting polymer, a method of directly constructing metal nano-materials with special morphology and structure on conducting polymer film is developed. The conducting polymer metal nano-composites obtained by this method can be used as high-efficiency surface enhanced Raman spectrum substrate materials, which are suitable for ultra-low concentration chemical and bio-molecular high sensitivity Testing. This research has published nearly 20 SCI papers in international journals such as chem. Mater., 2007, 19, 520-525; scientific reports, 2013 3, article number: 2997; chem. Comm., 2013, 49, 3389-3391 (journal cover); J. mater. Chem. 2011, 21, 2495-2501; CrystEngComm, 2012, 14, 8737-8737, etc., and obtained 4 authorized patents (US patent 7786, 037, US patent 7988887, us pa Tent 8148294, US patent 8279435), and was invited to publish a review article entitled “preparation of functional nano-composites based on the chemical reduction characteristics of conductive polymers” on the Royal Chemical Society chem. SOC. Rev., 2014, 43, 1349-1360, which was highly recognized by international peers.

(5) Synthesis of conjugated oligomers and polymers for LED

It has also made outstanding achievements in the synthesis and application of conjugated systems for light-emitting diodes (LEDs), and has published several pioneering articles together with Professor Alan g. MacDiarmid, mentor and Nobel Prize winner in chemistry. Relevant achievements were published in international famous journals: Synt. Met., 1996, 78, 33-37, cited 170 times; Appl. Phys. Lett., 1996, 68, 894-896, cited 146 times; J. Appl. Phys., 1995, 78, 4264-4266, cited 143 times; Phys. Rev., 1996, B54, 9180, cited 168 times). In addition, the team designed and synthesized a conjugated system for illumination, which was used to prepare a white light emitter based on a single molecule. The molecule used has two structures, each of which can emit one color of light, blue light and orange light, balancing the proportion of blue light and orange light, and then generating white light (chem. SCI., 2015, 6, 789-797). This work was introduced by chemistryview under the title of “white light from a single dye”.

Development of novel biosensors based on water-soluble conjugated polymers, carbon nano-materials and carbon nanotubes. PPV synthesis of water-soluble conjugated systems and their application in chemical and biosensors. Through π – π interaction, the team synthesized a series of conjugated naphthalene compounds on the surface of carbon nanotubes. The charge transfer from carbon nanotubes or conjugated polymers resulted in fluorescence quenching (patent of the United States, patent of patent us 6589731). After interaction with protein or enzyme, fluorescence recovered. This fluorescence detection scheme significantly improves the detection sensitivity, which is used in the development of biological devices by QTL bio-systems.

The research group is now looking for postdoctoral and research assistant positions. The specific requirements are as follows:

I. major:
Chemistry, physics, materials, textile and other related majors;

3. Other materials that can prove the working ability.

2. For the work of leaving the station and staying in Shenzhen, the housing subsidy of 1.6-2 million yuan can be obtained if it meets the reserve level or peacock plan talent conditions of Shenzhen;

3. Those who have overseas study experience who leave the station to stay in Shenzhen for scientific research can apply for 3-5 million peacock plan research start-up funds. At the same time, it enjoys social security and superior welfare, provides good office conditions and school housing, and provides opportunities for exchanges and visits to world-class scientific research institutes.

2. The preliminary candidates will be informed of telephone interview or video interview within one week;